Clene is launching a new class of bioenergetic nanocatalysts. Our nanocatalysts work in multiple cell types to improve multiple bioenergetic processes that may effectively treat many different diseases. This novel wide-ranging approach represents a revolutionary shift in the pharmacological treatment of disease.

Our CSN™ nanocrystal suspensions are engineered through the application of plasma physics and proprietary materials science, resulting in self-assembled, atomically clean-surface elemental nanocrystals unmodified by the addition of chemical surfactants or surface capping agents. The properties of these clean surfaced faceted nanocrystals allow for highly biologically active nanocatalysts. 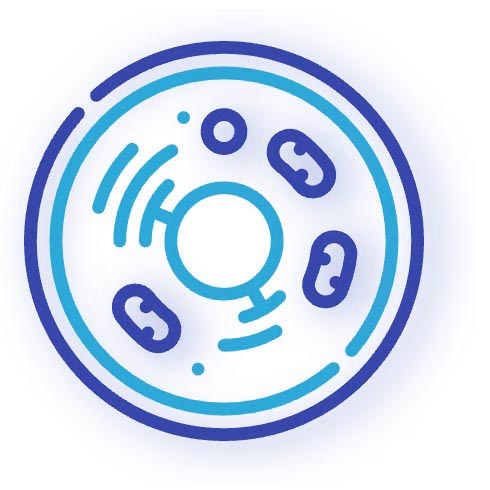 Throughout the central nervous system, neurons process information through an energetic and efficient network via nerve fibers called axons. Information travels through this network via electrical signals to enable cognition and physical function. To support this signaling, the brain needs substantial energy, consuming more than 25% of the metabolic resources of the body. In neurodegenerative diseases, metabolic activity becomes impaired in neurons resulting in debilitating loss of neurologic function. In addition to neurons, the brain cells that provide metabolic support to neurons and enable fast axonal signaling (oligodendrocytes) are highly energetically dependent and can become compromised in disease such as multiple sclerosis. In multiple sclerosis, the body attacks the protective sheath around axons, called myelin, that is generated by oligodendrocytes.

Nanocatalysis is the process of enhancing energetic support in neurons and oligodendrocytes. Nanocatalysis works in stressed cells by enhancing key metabolic reactions by acting as an electron reservoir. By donating and/or receiving electrons as needed, our neuro-therapeutic, CNM-Au8, increases cellular energy reserves, while independently decreasing harmful reactive molecules through direct catalytic activity. Nanocatalysis can improve the survival and function of neurons in addition to supporting oligodendrocytes’ ability to create new myelin.

The therapeutic potential of CNM-Au8 for helping patients with demyelinating and neurodegenerative disorders is revolutionary. No other drugs approved for the treatment of MS have been shown to remyelinate chronic MS lesions and no therapies have been shown to slow disease progression across MS, PD, and ALS.